On Tuesday, I started editing the facilitation guide again, with the intention of refining and articulating my language now that I’m a year more practiced in this work. I wrote:

“Remind yourself that facilitation is a practice. A practice is the repeated exercise of an activity, skill, or habit to obtain proficiency; practicing, the verb of it. There is no other way to become a facilitator than to practice facilitation in a space with children. Our intention for this guide is to provide the theoretical and practical framework which structure our own practices so you can orient yourself in the work.”

And then I thought “Huh. I wrote it, and it feels true. When did that realization happen?” Frankly, I wasn’t always so hot on the verb “practice”. In fact, as a kid I had a really fraught relationship with it because I primarily used it to describe practicing my instruments (I grew up in a family of musicians and played piano and flute from a young age), which felt more like homework than a joyful standalone activity. But over the last few months I’ve realized that a necessary part of my growth as a facilitator has been shifting this relationship; one doesn’t get trained in ALFing and then poof! You’re done! There is no way to prepare a human for every imaginable thing that will come up in the course of a day with self-directed learners; one can have all the theoretical knowledge and still be taken by surprise when the conversation takes an unexpected turn and suddenly you’re talking about the nature of evil on the 7 train in Queens, or a child comes up to you, hands you a tooth, and walks away, or you walk by the water fountain where a kid is gulping water and sobbing because, it turns out, she ate a whole habanero pepper. (These are all real things that have really happened to me in the last almost-two-years of my practice. Only one of them happened this week…)

Facilitation can sometimes feel like traversing the parts of old maps labeled “Here Be Dragons”: you’re beyond the part of the world where you can expect clear mile markers, and you’re pretty sure that there aren’t actual dragons out here in the unknown, but you’re drawing the map as you encounter things and you can’t rule it out until you’ve explored it all. And if you do encounter dragons, you’ll figure it out. You recognize that you’re adaptable; you’ve found you can hold boundaries with your anxiety about the unknown. You’re armed with the tools of your trade. And then once you’ve practiced what to do when you encounter a dragon, the next won’t be so scary.

Outside the daily facilitation practice I do here at ALC-NYC, I’ve also developed personal practices that have been extremely helpful in supporting me through this work: I [bullet] journal, I keep a personal kanban and make mosaics, and I do work with an oracle deck. An oracle deck is a deck of cards (like a Tarot deck, which I sometimes use, though my preferred deck right now is the beautiful Animal Spirit deck by Kim Krans) with a spiritual aspect; they’re a powerful tool for focusing your energy and for self-reflection. For a long time, my work with my deck was private: every night before I went to bed, I would shuffle the deck and concentrate myself, thinking about my day or trying to release it, and pull two cards, which I would then draw and write about. It started, at first, as an aspiration to keep a journal and to find a (sorely necessary) private space to connect with my introvert inner self, but as I filled up one notebook, then another, and another, I saw the ways in which I was learning to take up more space, to take more risks, to be reflective not just on what I did, but how it felt, how I wanted it to feel. I still do that, and I’m still refining that private practice, will be for a long time (until it doesn’t serve me anymore…). But recently I’ve leveled up: I now pull one card in the morning and photograph it and put it on instagram! It feels a bit scary to make public what has been, until now, a deeply personal practice; I’m practicing sharing my self with the world (on this blog, in the art I’m making, and now this…) and finding that, while it is intimidating at first, the connections I’ve deepened by putting myself out there have been well worth getting over my fear.

There are all these ads on the subway recently that say “life happens while you’re waiting.” For a long time, I was waiting for things to be perfect before I shared them with the world; facilitation has pushed me out of perfectionism into practice in ways that have been deeply uncomfortable and profoundly transformative. Turns out, I like it here. Turns out, I’m much more free. Turns out the world doesn’t care if something is perfect; it would rather be a part of my practice. 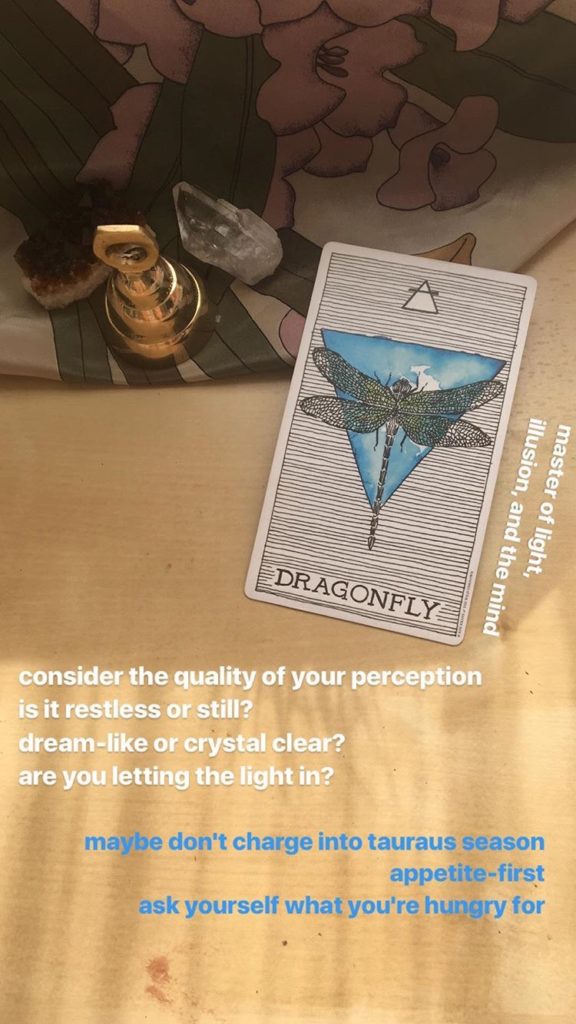 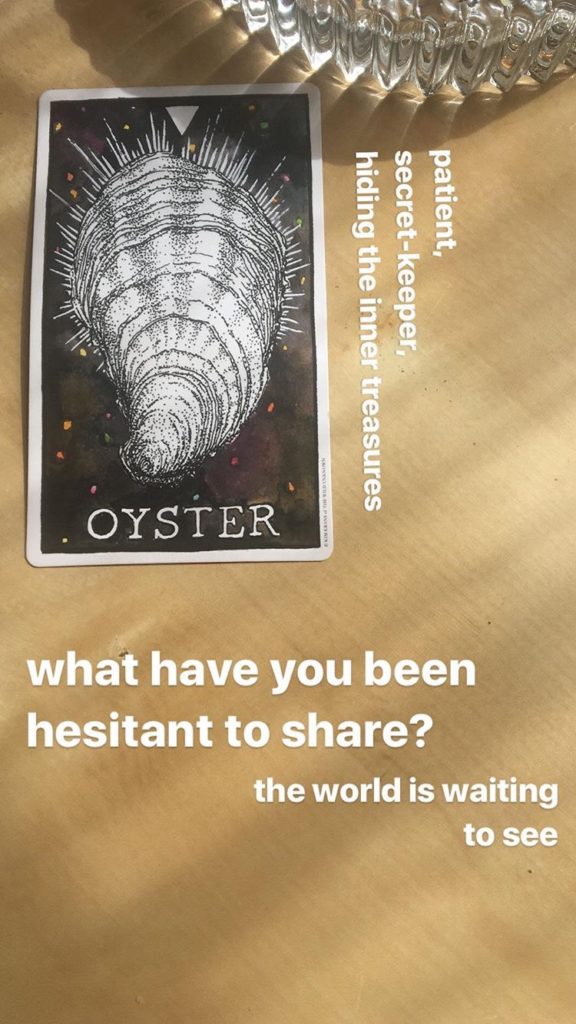 (I usually make boomerang gifs and wordpress is giving me a hard time about posting them here. Follow me on Instagram if you want to see them daily!)