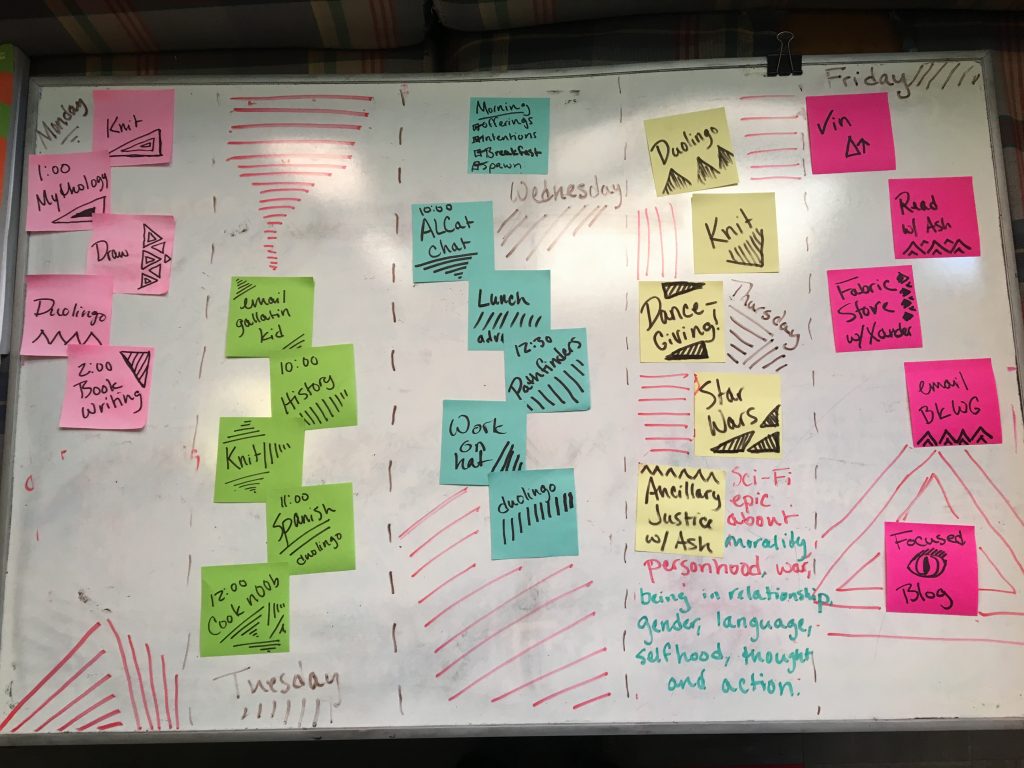 I didn’t post this on Friday! Last week was a visiting week and my brain was scattered and scrambled by the end of it with so many humans in the space. Luckily Brooklyn developments are looking optimistic…

I’ve been practicing Duolingo pretty consistently and I feel my Spanish starting to come back! I wish that I had not stopped studying it in school as soon as I could because I’m finding that all the words I learned when I was younger are easier to call up than the ones I’m trying to learn now. The hardest part of Duolingo has been keeping my streaks going. (I lost an 8 day one this weekend because I was all wrapped up in Friendsgiving. Sad, but worth it.) The best part is weird sentences, like this one: 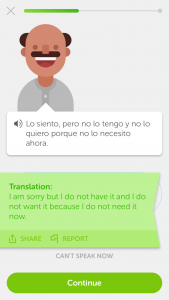 Last week they tore out the mums from the conservancy garden and Alex Patz brought us some so we could make flower crowns. I didn’t make one but Abby made me this happy yellow one. 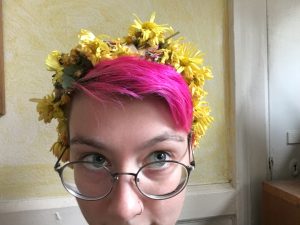 Other things we made on Tuesday: soap and french toast. I would have taken more photos except I didn’t XP 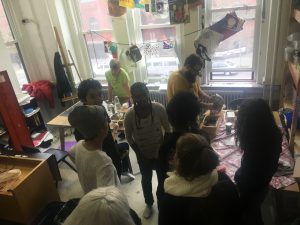 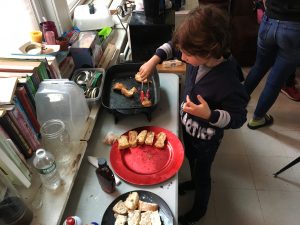 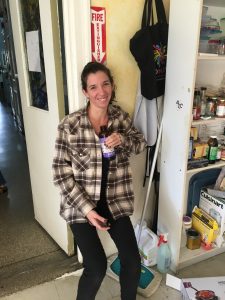 On Thursday, Sterl’s mom, Taasha the Amazing, donated an incredible Thanksgiving feast. We called it Dancegiving all week after Siena’s hilarious mispronunciation. I did not get any photos, because I was too busy enjoying all the food.

Ash and I are reading one of my favorite books together! He and I were talking about it on Thursday post-Dancegiving feast and he asked me to read it aloud to him because it’s kind of confusing to follow. It’s called Ancillary Justice and I’m really enjoying the reread (possibly the 5th or 6th time I’ve read this book) – I get more out of this novel every time I read it.

And finally, a Bob Ross update: 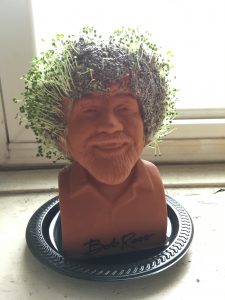 (he’s actually gotten a little moldy since, but he was looking good last week.) 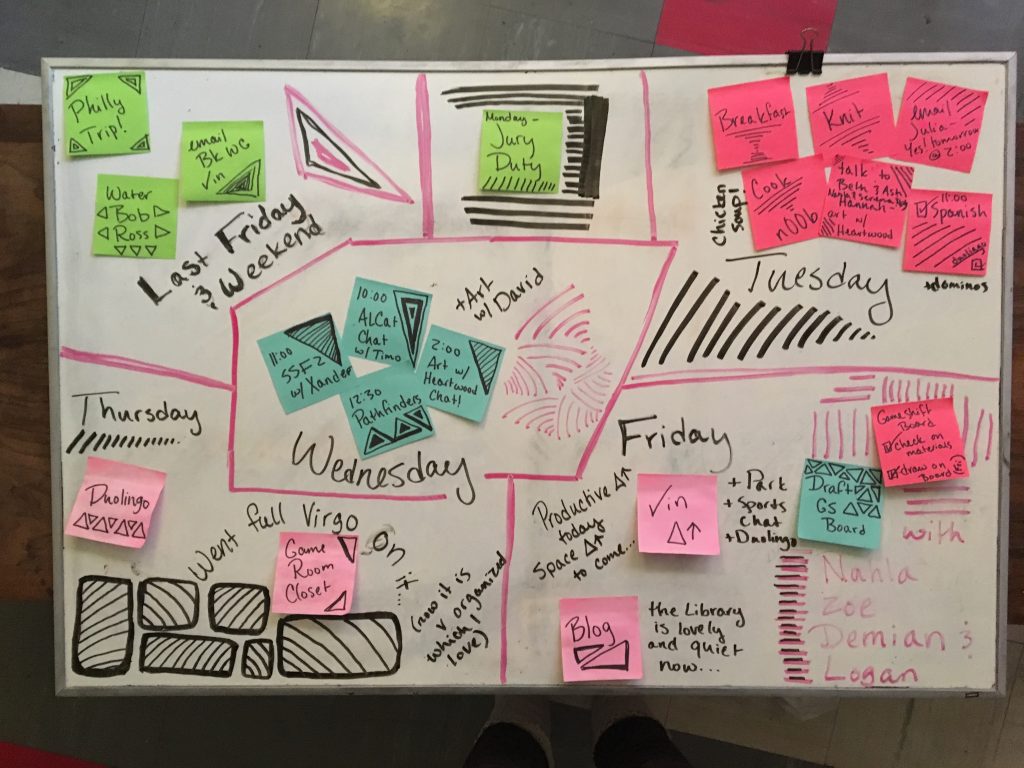 I missed monday because I had jury duty which was a bummer but I did not get placed on a jury and I did do my civic duty so that was no big deal (besides being mildly bored for a day when I could have been at school). I also voted Tuesday morning! Very civic week all around.

We went to Philly and Abby’s parent’s house last weekend! It was an awesome trip. I wish I had more photos but I took most of mine on something called “real film” so they are not instantly available – I will post them when I get it developed. Here’s some photos I did take: 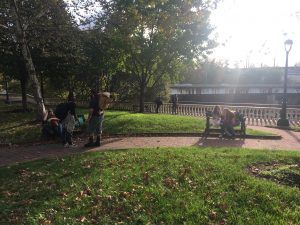 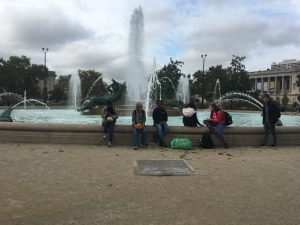 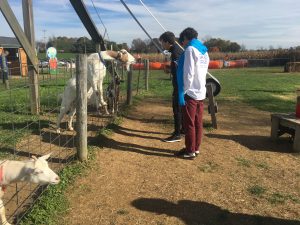 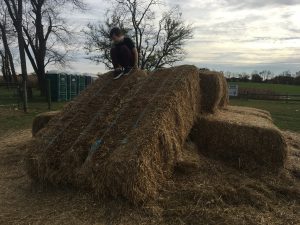 I did not include the week number in the title of this post because I’m learning that if a thing I’m doing feels arbitrary, I don’t have to keep doing it for continuity’s sake!!!!! (Knowing this rationally and acting on it are different things. I’ve been in the former state for a while, it’s the latter action that’s hard for my Virgo self…)

It’s good that we’re practicing getting out in the world because we skyped @mjuliacordero and some of the Heartwood crew this week and our teens were so excited/are talking about coordinating a trip to Atlanta now… (You can check out a photo on our instagram.)

I finished two big projects this week! One is the Gameshifting board I’ve been working on with my spawn – it’s taken a while to get all the materials but today we finally had everything we needed. @simoneboss @spino @zoe6 and Demian helped with design and execution and I think it turned out fantastic. 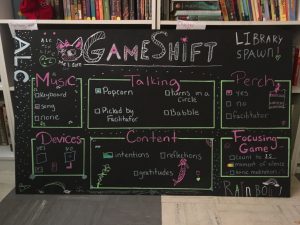 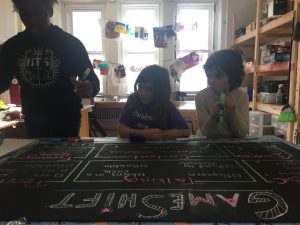 The other project I did this week was impulsive, but incredibly satisfying. Since I first started at ALC (last September) the game room closets have been an explosion of orphaned board game pieces, mixed-up playing cards, magnet tiles, lincoln logs, random dice, marbles, go stones, shredded boxes and more things to horrify a Virgo such as myself. I didn’t go on a field trip yesterday, which is my usual Thursday activity, and so I found myself with a whole day to tackle something new and that something was that chaos closet! I didn’t take a before shot, but here is during/after: 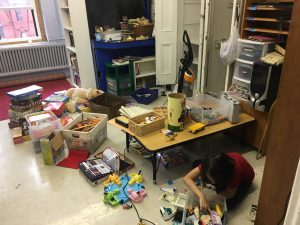 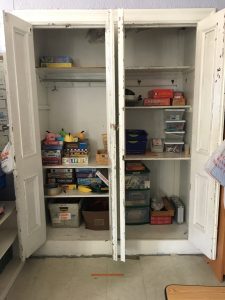 It’s not perfect (I wish I’d had time to label things, and there’s still a basket of all sorts of random cards in there that need to be sorted into their respective games…) but it’s MUCH better than it was and it was so satisfying to see how much more space there was in there when I was done.

Bonus photo: Ryan came back from the park today with flowers in his beard and it was rad… 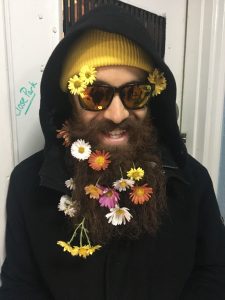